Latest update after Swiss Bank has agreed to disclose the funds.

Latest update after Swiss Bank has agreed to disclose the funds& .
Our Indians' Money - 70, 00,000 Crores Rupees In Swiss Bank
1) Yes, 70 lakhs crores rupees of India are lying in Switzerland banks. This is the highest amount lying outside any country, from amongst 180 countries of the world, as if India is the champion of Black Money.
2) Swiss Government has officially written to Indian Government that they are willing to inform the details of holders of 70 lakh crore rupees in their Banks, if Indian Government officially asks them.
3) On 22-5-08 , this news has already been published in The Times of India and other Newspapers based on Swiss Government's official letter to Indian Government.
4) But the Indian Government has not sent any official enquiry to Switzerland for details of money which has been sent outside India between 1947 to 2008.. The opposition party is also equally not interested in doing so because most of the amount is owned by politicians and it is every Indian's money.
5) This money belongs to our country. From these funds we can repay 13 times of our country's foreign debt. The interest alone can take care of the Center s yearly budget. People need not pay any taxes and we can pay Rs. 1 lakh to each of 45 crore poor families.
6) Let us imagine, if Swiss Bank is holding Rs. 70 lakh Crores, then how much money is lying in other 69 Banks? How much they have deprived the Indian people? Just think, if the Account holder dies, the bank becomes the owner of the funds in his account.
7) Are these people totally ignorant about the philosophy of Karma? What will this ill-gotten wealth do to them and their families when they own/use such money, generated out of corruption and exploitation?
8) Indian people have read and have known about these facts. But the helpless people have neither time nor inclination to do anything in the matter. This is like "a new freedom struggle" and we will have to fight this.
9) This money is the result of our sweat and blood.. The wealth generated and earned after putting in lots of mental and physical efforts by Indian people must be brought back to our country. 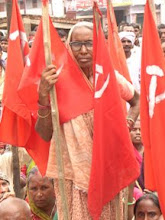